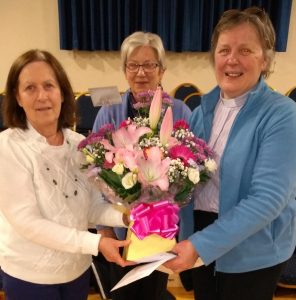 Omagh Methodist Church held its annual Congregational Meeting on Thursday 2 May 2019 in the Peter Good Hall with some 40 persons present. Rev Eleanor Hayden, much encouraged by the good attendance, opened with prayer before inviting reports on all aspects of Church life. The Financial Report showed the Church in good shape with all accounts in the black. The Property report suggested that there were many things on which the money could be spent, such is the cost of maintaining a listed building dating from the 19th century. Reports on the services in Lent held jointly with St Columba’s Parish Church were very positive in light of the very good numbers turning out week by week. These set the scene for Holy Week during which the special speaker at all the services was Dr Heather Morris. Her thoughtful message to the congregations of both churches was praised for the blessings and spiritual uplift which flowed from her talks. The remainder of the evening was filled with a series of brief but affirmative reports from representatives of the various Church Organisations along with in-put from those who fill different roles in the life of the Society. Mrs Esther Millar, Society Steward, closed the meeting with a well-deserved tribute to Rev Hayden for all that she brings to worship and pastoral life of Omagh Methodist. All present concurred and expressed their appreciation with a gift of flowers to Rev Eleanor as she embarked on a well-earned three-month sabbatical.