On Thursday 24th January 2019 some 60 men gathered in the Church for a service at which the special speaker was Michael Kelly, Managing Editor of The Irish Catholic. Michael is well-known in the Omagh community. He was born in the town and educated at St Patrick’s High School before progressing to Maynooth College where his interest in the media took him into broadcast journalism. He has worked for Vatican Radio and in a varied career has travelled with the Pope on pastoral visits to Latin America, serving as a Papal Press Officer. He has been Managing Editor of the Irish Catholic since 2012 and is a respected writer and commentator on religious affairs.

Michael’s talk to those who had joined together for fellowship during the Week of Prayer for Christian Unity was about what binds us together as Christians. Drawing on his extensive travels and stories current in the media he reflected on the challenges which Christians down the years have faced in the practice of their faith and the persecution they have endured. He was pleased that the proceeds from the supper (£500) were going to the church community in the Holy Lands because of his empathy with hard-pressed Christians in Middle Eastern countries where the majority population follow Islam.

More Christians have died for their faith in the 20th century than in any other century since the dawn of Christendom. When he lived and worked in Rome he said he could never pass the Colosseum without thinking about those early Christians martyred for their faith. He praised the British Foreign Secretary, Jeremy Hunt, for speaking up in support of the persecuted church and the government’s commitment to confront those countries where intolerance is tolerated. He referred to Jesus’ encounter with the Samaritan woman at the well as an illustration of how our Lord tackled prejudice and shared how she is venerated in the Orthodox Church as a saint.

Michael pondered why in the Church today many hear the scriptures but do not embrace Christ. Pope Benedict was a scholarly and devout man who at the end of his life concluded that being a Christian is simply being a friend to Jesus. Knowing He is alive and well and ever present will lead us to discover what Christ is calling us to do. For those seeking Christian Unity it was a plain and powerful message.

Worship during the service was led Rev Sean Hanily and the Praise Group from St Columba’s Parish Church in Omagh. The hot supper after the service was served by the Rev Eleanor Hayden and husband, Gareth assisted by members from the Men’s Breakfast Fellowship. 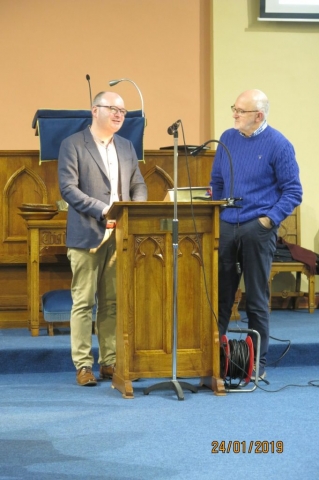