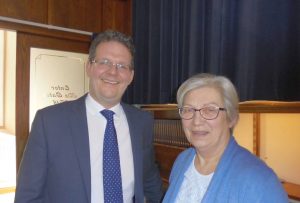 In the Methodist Church the first Sunday after Easter is designated “Local Preachers Sunday”.  It exists in the church calendar to give ordained clergy a well-earned break following services during Holy Week.   The local preacher in Omagh Methodist on Sunday 8th April 2018 was Mr Richard Henderson, a well-known stalwart of Togherdoo Methodist Church.    Richard took as his text 2 Kings 6.16. which reads “Don’t be afraid”, the Prophet answered.  “Those who are with us are more than those who are with them”.  The verse forms part of the account of how the Prophet Elisha stopped the armies of King Aram raiding Israel’s territory.  It comes in a passage entitled “Elisha traps blinded Arameans” in which there is a searching army, an invisible army and a blind army.   From what appeared an improbable story, Richard drew out parallels with daily life and living today in a well constructed, thought-provoking sermon.