At 11.00 am on Saturday 11th November 2017 a small crowd gathered at the War Memorial in Omagh to join in a national Act of Remembrance. Following a reading and prayers lead by Rev Eleanor and a passage by Richard Scott, Chairman, Omagh Branch Royal British Legion, a two minute silence was observed. A guard of honour was provided by a group of young poppy sellers. This short service at the 11th hour of the 11th day of the month was to have preceded the main parade and wreath-laying ceremonies on Sunday 12th. It was not to be. Following a warning telephone call to the PSNI a viable explosive device was discovered in a litter bin close to the cenotaph and the area cordoned off. A shortened parade took place from the Royal British Legion Hall in Campsie Road to Omagh Academy where a combined service was held with clergy from all the main churches taking part. 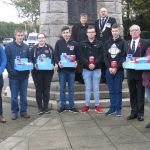 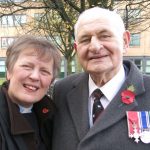 Rev Eleanor with Brian Maguire at the Cenotaph 11.11.17 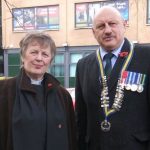